I wanted something cyber-punk, post-apocalyptical… a little bit like “BladeRunner”. Hiring Vangelis was kind of “out of my possibilities” (maybe when EA, Zynga or other ultra big company buys our project)… so I composed/performed the songs myself. It turns out it got more “pop” than I wanted… But it is cool.

It is amazing what you can get out of GarageBand in the iPad2 (in Brazil I had a 6 octaves midi keyboard connected to my Mac). Surprisingly, on the iPad it is possible to perform “touch-tricks” impossible to my old keyboard (controlling vibratos, glissandos or modulations directly on the keys; and very convincing guitar performances).

I finished the second part of the song on my flight to Barcelona – on the plane!

The song and the instrument channels in GarageBand: 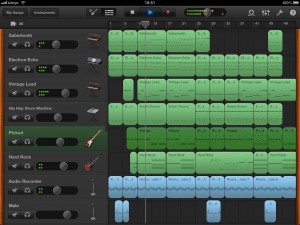 NanoSub Theme on GarageBand for iPad